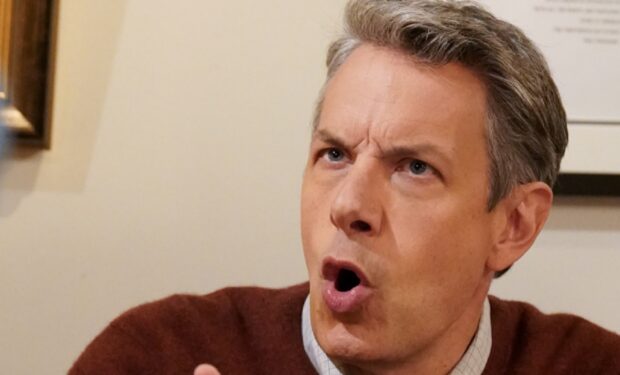 On the United States of Al episode “College / Pohantoon,” while Art’s (Dean Norris) confidence is shaken when he learns Lois (Rachel Bay Jones) used to be married to a professional football star, Al (Adhir Kalyan) struggles with the college class he is taking, and Riley (Parker Young) takes it upon himself to speak to his psychology professor. That instructor, Professor Brett Williams, is portrayed by John Ross Bowie.

JRB is known for his roles on The Big Bang Theory as Barry Kripke, and on Speechless as husband/ad Jimmy DiMeo), among others. And he occasionally sings with punk rock bands. To learn more about Bowie (which rhymes with Maui) and his passion for music, follow him on Instagram.

When he shared the headline below about Eric Clapton, he wrote: “I said it when I was a young angry punk and it still holds true: Clapton is old and boring.” Jack Black replied: “Wait…so the opening act was cool with everything else before that?” Former guitarist for The Go-Gos Jane Wiedlin had a few words, too.

United States of Al airs Thursdays at 8:30 pm on CBS, right after Young Sheldon at 8 pm.