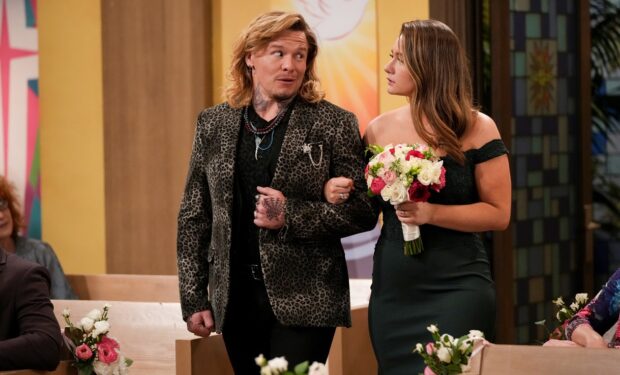 In The Conners episode ‘The Wedding of Dan and Louise,’ the big day has arrived but it’s “a far-from-perfect walk down the aisle, especially when a weather report forecasts that a tornado is headed for Lanford creating chaos and surprises.” While waiting at the altar for Louise (Katey Sagal), Dan (John Goodman) watches a man named Aldo walking his granddaughter, bridesmaid Harris (Emma Kenney) down the aisle.

Aldo is portrayed by Tony Cavalero. A member of The Groundlings impro group, Tony is best known for his TV roles on The Righteous Gemstones with John Goodman (Keefe), School of Rock (teacher Dewey Finn), Hart of Dixie (Stanley Watts), and in films including The DUFF (Sweater Guy), among others.

Get ready to see more of Tony: he will appear next on the big screen in the upcoming movie Saturday at the Starlight, a comedy set at a roller rink in the 1990s, with Denise Richards, Abigail Breslin, Brec Bassinger, Michael Madsen, and Tony’s real-life wife, actress Annie Cavalero.

The Conners airs Wednesdays at 9 pm on ABC, right after the new Wonder Years at 8:30 pm.