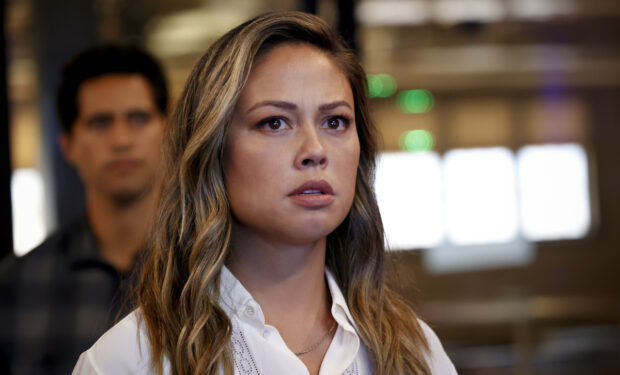 On the NCIS: Hawai`i episode “Recruiter,” Kai (Alex Tarrant) goes undercover with one of Hawai`i’s oldest surf gangs when a petty officer who’s trying to help wayward kids find a new path in the Marines is murdered. He’s going to have to report to Special Agent in Charge Jane Tennant (Vanessa Lachey).

When not filming NCIS: Hawaii, Vanessa spends time with her family including her husband, former 98 Degrees boy band singer turned TV personality Nick Lachey and their children, including their adorable daughter Brooklyn. When Vanessa shared the photo below, more than one fan wanted to know where to get that dress!

The dress is by ACLER and it’s called the Sherwood Belted Mini Shirt Dress. The designer says the belt along the waist gives that desirable “cinched-in silhouette.”

When Vanessa shared the super glamorous photo above with Nick (for the 2021 Emmys), her fans and famous friends went wild with praise including “gorgeous” and “beautiful” and “You look amazing!” Actress Kyla Pratt (Dr. Dolittle) replied: “Bomb AF.” Another fan cleverly replied: “98 degrees hot.”