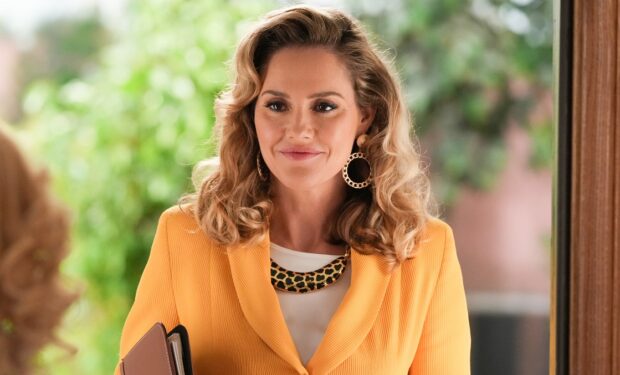 In The Goldbergs episode ‘The William Penn Years,’ while Adam (Sean Giambrone) is recruited to film his high school’s highly awaited last football game of the year, Beverly (Wendi McLendon-Covey) discovers her neighbor Arnie Wolfy (Dan Lauria, The Wonder Years) is moving and she’s determined to buy his spacious home and move the family in. Enter Beverly’s “get what you want” friend Jane Bales. (Back in the day, Century 21 real estate agents wore a signature yellow jacket!)

Actress Erinn Hayes made her memorable debut as Jane in the “Bill’s Wedding” episode (November 2020) — see “Jane Bales Shows Beverly How To Get What She Wants” clip below.

Erinn Hayes is best known for her roles on series including Children’s Hospital (Dr. Lola Spratt), The Dangerous Book for Boys (mom Beth), Kevin Can Wait (wife/Donna), Parenthood (Racquel), and in films including Bill & Ted Face the Music (Ted/Keanu Reeves’ wife Elizabeth), among others.

The Goldbergs airs Wednesdays at 8 pm on ABC right before The Wonder Years at 8:30 pm, and The Conners at 9 pm.