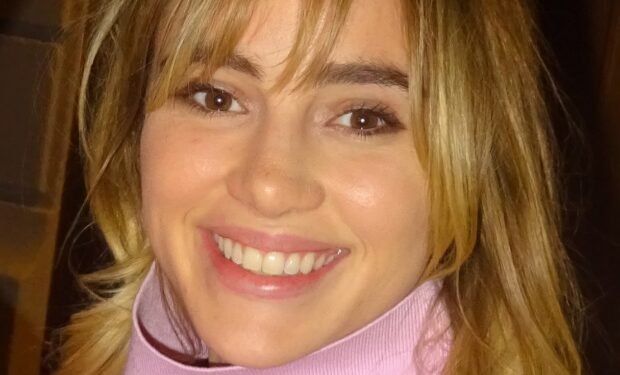 English model Suki Waterhouse launched her acting career in 2010. Now the 29-year-old is starring in the forthcoming TV mini-series Daisy Jones and The Six, based on the New York Times bestselling book. The film follows the rise of the LA rock band Daisy Jones and The Six in the ’70s, on their quest for worldwide icon status. Riley Keough (the late Elvis Presley’s granddaughter) plays Daisy; Suki plays keyboardist Karen Sirko.

When not on the set, Suki sings and continues to model as seen in the stunning photos above and below. She captioned the alluring pic above: “put some goddamn moves on you” which is a lyric from her new single, “Moves.”

Her fans are going wild for the photos and her new music. As one fan replied: “I’M OBSESSED with Moves and My Mind.” More than one fan say they have Moves “on repeat.”

That zip-up leather jumpsuit is by the French fashion house Enfants Riches Deprimes. (Translated: Depressed Rich Kids.) Below is her recently released music video for her single “Moves.”

Get ready to see more of Suki: she will appear next on the big screen in Persuasion, a new adaption of Jane Austin’s novel starring Dakota Johnson as Anne Elliot and Henry Golding as Mr. Elliot.