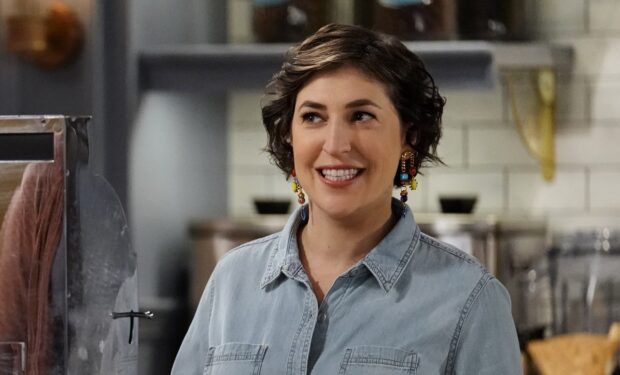 Mayim Bialik is the current host of the super popular American TV game show Jeopardy! Prior to this 5-day-a-week gig, Mayim starred in the hit sitcom The Big Bang Theory and launched her acting career when a child (Blossom, Beaches). In between Blossom and The Big Bang, Mayim earned her doctorate degree in neuroscience from the University of California. Not all Americans know Mayim has a Ph.D. but it looks like many Israelis do.

When Mayim shared the photo above, of her projected on a screen in a classroom in Israel, she explained: “My cousin sent me this from her daughters school in Israel. They learned about me lol.” Mayim’s fans and followers on Instagram replied with compliments including: “Because you’re an ICON!! And what a great model you are for young Jewish Women! Not just women, not just Jews, but Jewish Women!! How exciting and humbling that must make you feel! Bless you!!”

Get ready to see more of Mayim: her sitcom Call Me Kat was renewed for a second season which premieres on January 9, 2022, right after NFL on FOX. When she shared the gorgeous promotional photo above — swipe to see a hint of cleavage under that sexy satin ensemble — she thanked her hair and makeup stylists for “making the magic happen.” One fan replied: “This is your color!”

We think Mayim and Cheyenne’s co-star Leslie Jordan is beautiful, too! See photo above of Leslie as a guest star on The Masked Singer with Nicole Scherzinger!