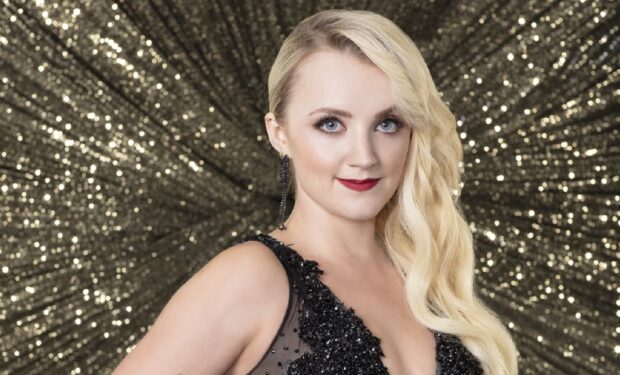 Irish actress Evanna Lynch is best known for her role as Luna Lovegood in the Harry Potter movie franchise, and for competing on Season 27 of Dancing with the Stars. Now the 30-year-old gorgeous and talented star is promoting her book, The Opposite of Butterfly Hunting: The Tragedy and Glory of Growing Up – A Memoir.

When promoting her book, Evanna has been wearing memorable ensembles including the butterfly eyelashes and butterfly adorned hair up-do (swipe the photo above). DWTS judge Carrie Ann Inaba replied: “You always look beautiful!” And as one fan replied: “It’s a magical look!”

Evanna’s fans love the rainbow-colored star print dress above, too! The “fit and flare” mini dress is called the Juliette Star Waves Dress and its by Sugarhill Brighton. It’s described as “Smart yet playful… with full length blouson sleeves, a fitted waist and a frill hem skirt.”

Get ready to see more of Evanna: she will star in Season 25 of the epic BCC crime drama series Silent Witness.