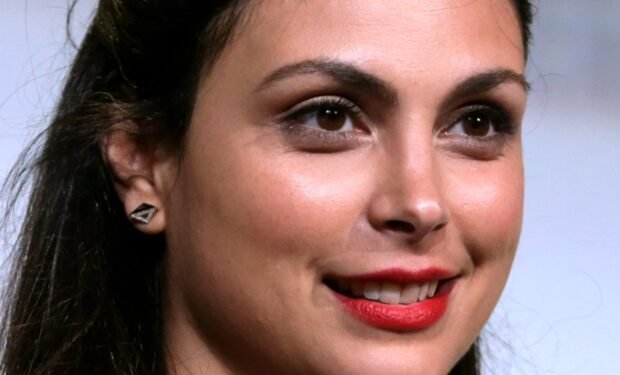 The Brazilian-born actress Morena Baccarin is known for her TV roles on The Flash (Gideon), Gotham (Leslie Thompkins), Homeland (Jessica Brody), Firefly (Irana), and in the super popular Deadpool movies with Ryan Reynolds (Vanessa), among others.

When Morena shared the stunning photos above and below, of her modeling a sheer black blouse under an olive green jacket, she captioned it: “Something fun this way comes…” Hint: the quote “Something evil this way comes” is from Shakespeare’s Macbeth (one of the witches says it), and it’s also the title of the 1962 novel by Ray Bradbury about a creepy traveling carnival that effects two teenagers in a small Midwestern town.

Get ready to see more of Morena: she is scheduled to appear next on the big screen in the action/thriller Last Looks about a disgraced ex-cop (Charlie Hunnam) who lives in the woods and is recruited by a private detective (Mel Gibson) to help him investigate a murder. See BTS photos below.

And when not on a big Hollywood set, Morena spends time with her real-life love, former Gotham co-star Ben McKenzie…

… or in front of a Wonder Woman mural (above) that has her fans a little more than excited. One replied: “It would be great if you appeared in Wonder Woman 3 playing the villainous enchantress Circe!”