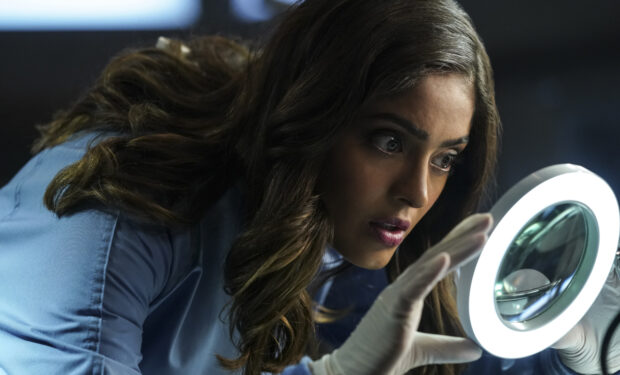 In the series CSI: Vegas, a sequel to CSI: Crime Scene Investigation, a new team of investigators face an existential threat that could bring down the entire Crime Lab and release thousands of convicted killers back onto the streets of Sin City, Las Vegas. See sneak peek video with interviews below!

The team is led by Maxine Roby (Paula Newsome), who recruits CSI veterans including Gil Grissom (William Petersen), Sara Sidle (Jorja Fox) and David Hodges (Wallace Langham). One of the new faces on the forensics team is Allie Rajan, who is portrayed by British actress Mandeep Dhillon.

When not on the CSI: Vegas set, Mandeep often models as seen in the stunningly sexy black lace lingerie photo above. As one fan replied, “Whoa!” Another replied: “So beautiful and very hot you look so stunning.”

The British actress is known for her roles on the Netflix series After Life with Ricky Gervais (Sandy), 24: Live Another Day (Chell), and in the 2019 film Star Wars: Episode IX – The Rise of Skywalker (Lt. Garan), among others.

She also looks great in a bikini top and crop top!

CSI: Vegas, which premieres on October 6, airs Wednesdays at 10 pm ET on CBS.