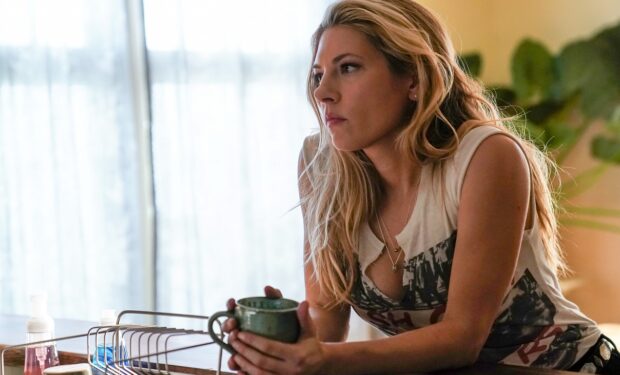 On the Big Sky episode ‘Huckleberry,’ Cassie (Kylie Bunbury) takes on a missing person case brought in by a concerned girlfriend while Jenny (Katheryn Winnick) continues to search for clues relating to the mysterious truck accident. While rocking a ripped vintage rock shirt, Jenny realizes she and Cassie are working on the same case!

In one scene, Jenny wears a ripped “dirty white” Clash City Rockers t-shirt (above) and in another she rocks a ripped UB40 Geffrey Morgan tee. Geffrey Morgan was the title of the reggae/pop band UB40’s 1986 album. That ‘Clash City Rockers’ (the title of a 1978 song by the punk rock band The Clash) tee sells for $345 and the color of it is referred to as “dirty white.”