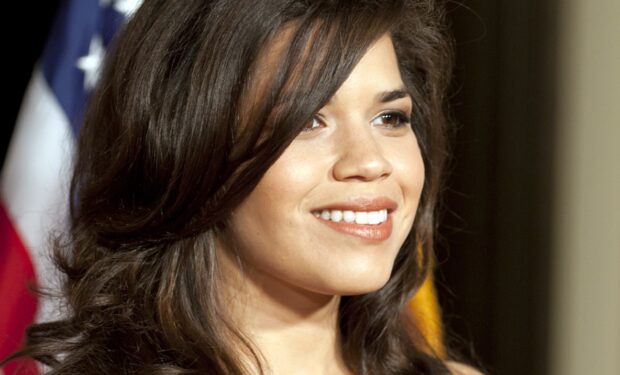 Actress America Ferrera is known for her roles on Superstore, Ugly Betty and in The Sisterhood of the Traveling Pants movie franchise with Blake Lively, among others. She made her acting debut in the 2002 film Real Women Have Curves — a title that comes to mind while watching the now 37-year-old star walk the red carpet.

At the Emmys, America slipped into a purple plunging cami dress by designer Juan Carlos Obando who describes it as a “lightweight bias cut ankle length slip dress” with contour fit, thin straps, fluid drape and high side slits. P.S. It’s made in America.

America also rocked the Monique Lhuillier blue strapless gown she wore at the 2007 Emmys to a friend’s 40th birthday party that had the dress code: “Wear the fanciest thing that’s already in your closet.”

Get ready to see more of America: she stars in the upcoming series WeCrashed about the rise and fall of WeWork, with Jared Leto and Anne Hathaway, among others. Premiering in 2022.