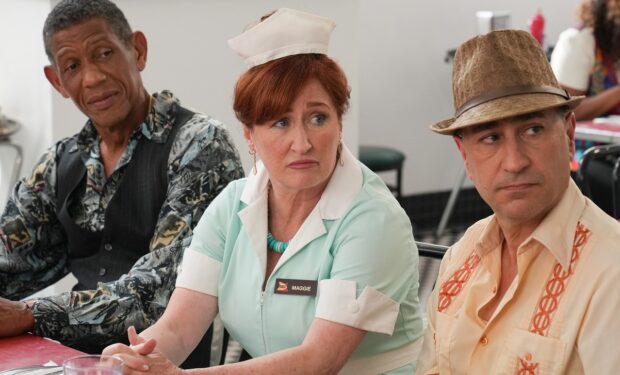 On the Season 9 premiere of the popular family sitcom The Goldbergs, “Excellent Adventure,” the episode revolves around a tribute to Pops, the grandfather of the show who was portrayed by the late great George Segal. Together the family ventures down memory lane by visiting Pops’ favorite stomping grounds including his favorite diner. There, they meet redhead waitress Maggie who’s portrayed by veteran comedic actress and Broadway star Vicki Lewis.

Vicki is best known for her TV role as Beth on NewsRadio with the late great Phil Hartman, Dave Foley, Maura Tierney, Andy Dick, Joe Rogan (above), and in movies including Breakfast of Champions with Bruce Willis (Grace Le Sabre), Godzilla with Matthew Broderick (Dr. Elsie Chapman), and Mousehunt (April Smuntz) with Nathan Lane (photos below). Vicki is also known for her voice-over work: she is Deb/Flo in Finding Nemo and Finding Dory.

The Goldbergs airs Wednesdays at 8 pm on ABC, right before The Wonder Years reboot starring Dule Hill at 8:30 pm and The Conners at 9 pm.