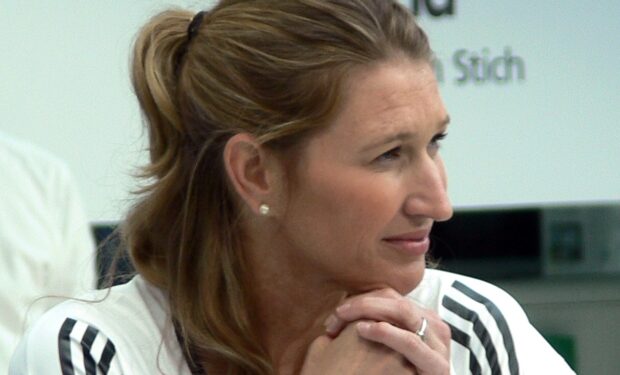 While watching professional tennis champion Novak Djokovic get closer and closer to making tennis history at the 2021 US Open — to win a men’s record-breaking 21st Grand Slam — the names of other champions rise to the surface including the great Steffi Graf.

Not only has the incomparable Steffi won 22 Grand Slam single titles but in 1988, she became the only tennis player to achieve the Golden Slam by winning all four Grand Slam singles titles and the Olympic gold medal in the same calendar year. (Djokovic, who is aiming for a calendar slam in addition to his 21st, lost the gold medal at the 2021 Tokyo Olympics to Zverev.)

So what are Steffi and her husband, fellow tennis champion and Hall of Famer Andre Agassi, up to? Do they still play? The answer is yes. When eight-time Grand Slam champion Andre shared the photo above of his wife on the court (in Vegas in February), he captioned it with an emoji of ogling eyes. Fans are showering the couple with compliments including “She’s still rocking that insidious slice backhand.”

P.S. Graf is the only tennis player, male or female, to have won each Grand Slam tournament at least four times.

This kid has been with us since he was 8!! Amazing family and awesome kid. Congrats @Jadenrock55 on signing your NLI to play baseball at @USC_Baseball ✌️✌️ pic.twitter.com/6ZxKfZqYTj

The power couple have two children: a 19-year-old son Jaden (a baseball player at USC, see above), and a 17-year-old daughter Jaz. Andre and Steffi will celebrate their 20th wedding anniversary on October 22, 2021.

And when not on the court, the “empty-nesters” are out and about having fun together as seen in the April 2021 skiing photo above.

Andre keeps his fans happy by sharing personal photos of the couple having fun together, whether it’s on a 339-foot yacht or at a professional hockey game!