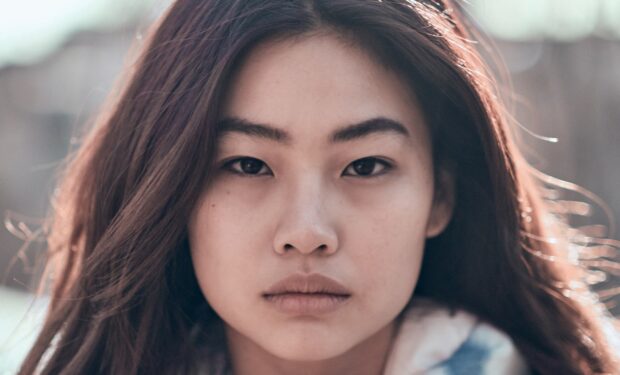 Squid Game is the new creepy Netflix series about a group of cash-strapped people who are forced to compete against each other in a game of survival. The grand prize is $40 million but in order to win, you have to be willing to sacrifice the lives of your competitors. Actress HoYeon Jung portrays Kang Sae-byeok. Watch the striking trailer below.

This is the acting debut of the 5’10” Korean-born model who was a contestant on the reality TV show Korea’s Next Top Model in 2013. The 27-year-old beauty has walked the runway for the world’s most famous designers including Brandon Maxwell, Vera Wang, Oscar de la Renta, Burberry, and Tory Burch, among others.

HoYeon reveals her insane abs in Chanel above and Dior below.

In 2019, HoYeon was one of the models chosen for the launch of The Chanel Pharrell Collection, a collaboration between the French fashion house and singer/songwriter/producer Pharrell Williams, in Seoul, Korea. Watch the video below — it was directed by Fleur Fortune.

The song featured in the video above is “Anni’s Constant”, which was written by Caroline Shaw, and performed by the Brooklyn Youth Chorus.