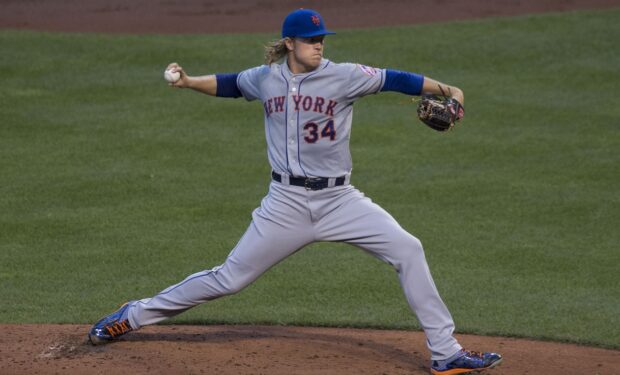 Noah Syndergaard is the 6’6” right-handed pitcher on the New York Mets. He launched his MLB career in 2010 when he was selected by the Toronto Blue Jays in the first round of the 2010 MLB Draft. He was traded to the Mets in 2012. It’s been a tough year for Noah (aka Thor): he underwent Tommy John surgery in March 2020 and then tested positive for COVID-19 at the end of August 2021.

When Noah shared the shirtless photo below, he captioned it: “Could be worse… I could walk around pant-less.” His fans teased him with comments including one from former pro player Logan Bawcom: “Look at that chest fuzz coming in!” And Miami Marlins pitcher Paul Campbell replied: “Boy lookin thicc!”

When Noah/Thor shared the at-home pitching video above, more than one wanted to know why he’s wearing a shirt! Others sent good wishes like “feel better” and glad he’s “keeping busy.”

The Mets faces the Marlins in Miami on Tuesday, September 7 at 6:30 pm on FS1.