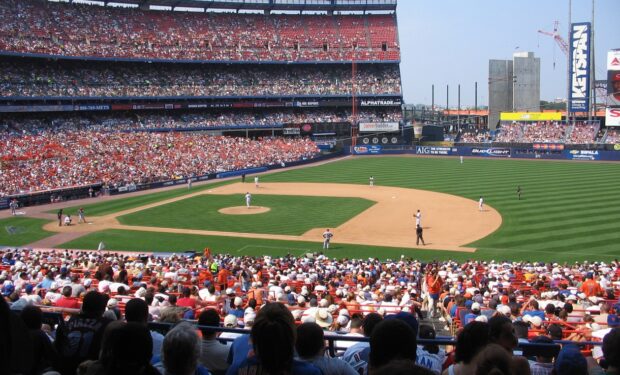 In the new 30 for 30 four-part documentary “Once Upon A Time in Queens,” the sports series chronicles the 1986 World Series champion New York Mets. “A colorful team marked by dominance and demons,” says ESPN. Interviews with players include first baseman Keith Hernandez, right fielder Darryl Strawberry and pitcher Dwight “Doc” Gooden. See trailer below.

Doc made his MLB debut in 1984 for the Mets and won the NL Rookie of the Year Award, and as a 19-year-old rookie, led the league in strikeouts. (Check out Doc with all-time great Hank Aaron in the 1984 photo below!)

Doc Gooden went on to play 16 seasons in the MLB but his career was ultimately “derailed by cocaine and alcohol addiction.” He retired from the league in 2001 and his name appeared on the 2006 Baseball Hall of Fame ballot but he didn’t receive enough votes (3.3 percent). However, in 2010, Gooden was inducted into the New York Mets Hall of Fame.

Before the premiere of the 30 for 30 Mets special, Doc shared the photo above of his posing/standing tall with another MLB legend, Pete Rose aka Charlie Hustle. Doc captioned the pic: “I got my very first autograph from this guy when I was 10 years old!”

The photo of the two legends together has prompted another round of outcries from baseball fans who want to see Pete Rose in the Baseball Hall of Fame. “Put him in the HoF already!” was one reply.