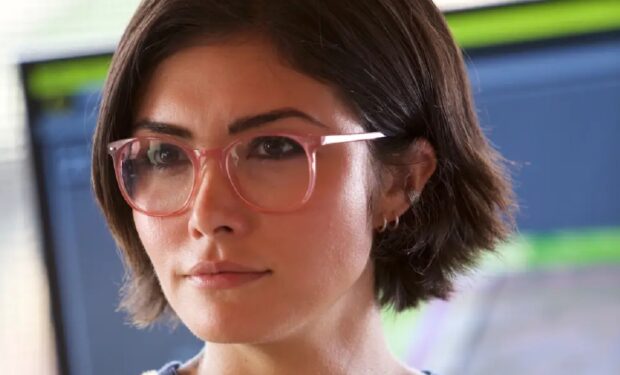 Actress Daniella Pineda is known for TV role as Sophie Deveraux on The Vampire Diaries and The Originals, and as Zia Rodriguez in the 2018 movie Jurassic World: Fallen Kingdom. The gorgeous and talented 34-year-old actress is reprising her role as Zia for Jurassic World 3: Domination and reuniting with mega stars Chris Pratt, Bryce Dallas Howard, and Jeff Goldblum, among others.

And for the third and final movie of the Jurassic World trilogy, the original doctors from Jurassic Park (played by Sam Neil and Laura Dern) will return.

When not on a TV or movie set, Daniella spends time outdoors and sometimes in a bikini as seen in the photo above, which she captioned: “Like, I’m all smart and shit.” The book she’s reading is How To Avoid a Climate Disaster: The Solutions We Have and the Breakthroughs We Need by Microsoft billionaire, author Bill Gates.

Get ready to see more of Daniella: she’s currently filming the action/adventure film The Plane with Gerald Butler, who plays a pilot forced to land his commercial aircraft in a war zone. Daniella plays the smart and sexy head flight attendant.

Jurassic World 3: Domination will be released in theaters on June 10, 2022.