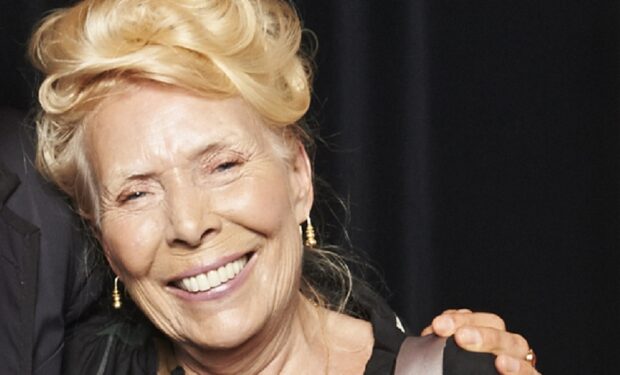 As the music world celebrates the 50th anniversary of the Joni Mitchell album “Blue,” the 77-year-old artist filmed the video response below. Wearing her signature long blond hair in two braids, she says: “I’m so pleased with all of the positive attention that ‘Blue’ is receiving these days.” When it was first released, it received a lot of criticism. She adds: “So 50 years later, people finally get it.” She laughs. “And that pleases me. Thank you.” As one fan replied: “Oh that laugh!”

Singer/songwriter Brandi Carlile replied Joni aka “gorgeous starburst” and wrote: “you’re number one in the charts now by the way. So you win.”

Photographer Norman Seeff is behind the 1970s bikini pics of Joni above and below, which are featured in their book Joni: The Joni Mitchell Sessions.

Get ready to see more of Joni: she (with Bette Midler, Motown founder Berry Gordy, and Saturday Night Live creator Lorne Michaels) will be feted at the 44th Kennedy Center Honors in December 2021.