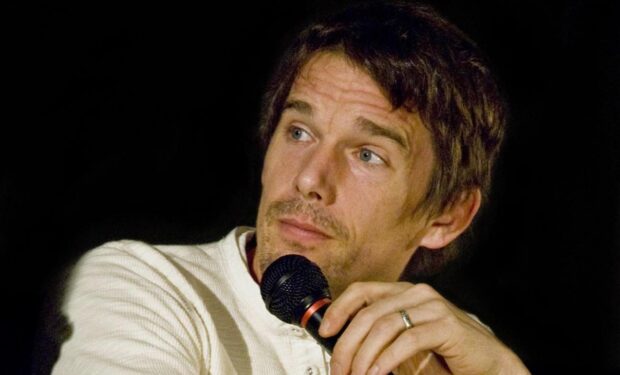 Hollywood movie star Ethan Hawke stars in the upcoming horror film The Black Phone. When the 50-year-old actor shared the sinister promotional photo below, he captioned it with the tagline: “Never talk to stranger.” When actress January Jones (Mad Men, The Last Man on Earth) saw it, she replied: “this is not ok, the poster alone is gonna give me nightmares.”

Another fan replied: “Best movie poster of the pandemic.”

The Black Phone is based on the terrifying Joe Hill short story of the same title. Set in the 1970s, Hawke stars as the villain, an awkward magician who kidnaps children in Colorado in the 1970s. Nicknamed “The Grabber,” he keeps his victims in a basement where a black phone hangs on the wall. His latest victim, a boy named Finney (Mason Thames) is told it doesn’t work but the child receives calls from the Grabber’s past victims who try to help the boy escape.

For a recent Reddit AMA, Hawke wore those Black Phone eyeglasses on while talking about his new graphic novel with Greg Ruth, Meadowlark. See below.

The Black Phone, which is directed by Scott Derrickson (The Exorcism of Emily Rose, Sinister, Doctor Strange) will be released on January 28, 2022.