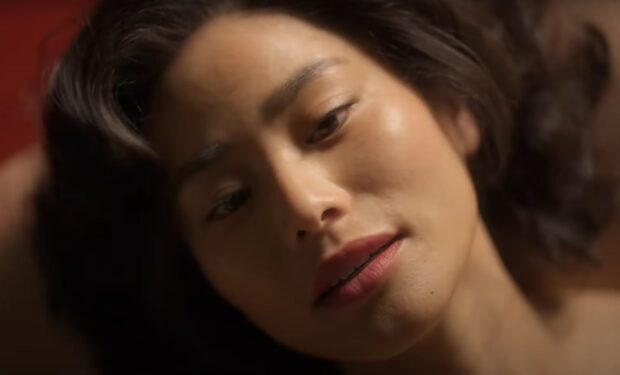 Actress Jamie Chung is known for her roles on Lovecraft Country (Korean nurse Ji-Ah; watch video below), Once Upon a Time (Mulan), Gotham (Valerie Vale), and in films including The Hangover (Lauren) and Grown Ups, among others. When not on a TV or movie set, the gorgeous and talented actress is often promoting her latest project (the action/adventure film The Misfits with Pierce Brosnan) in fashion-forward ensembles as seen below.

In the photos above and below, Jamie is rocking a navy blue wrap dress by Mistress Rocks. The label describes the mini skirt as being able to “gather sexily to one side with a functional drawstring to pull in and style as short as you dare.” P.S. Those strappy slip-on heels are Jimmy Choos.

Get ready to see more Jamie: she will appear next on the upcoming Dexter: New Blood series with Michael C. Hall, who’s reprising his serial killer role for the spin-off which is set 10 years after Dexter Morgan went missing in the eye of Hurricane Laura: he’s now living under an assumed name in Upstate New York.