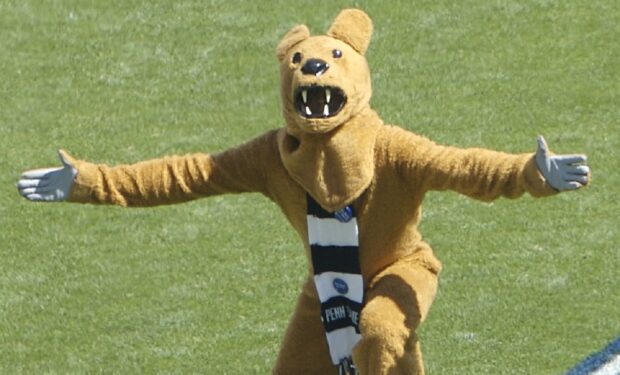 Football legend Desmond Howard had a lot of reasons to smile big during his college and NFL football careers, but it looks like the player-turned-ace-commentator saved his biggest smile for the Happy Valley. Howard shared this video of the Nittany Lions crowd’s hypnotic “We are Penn State” chant early in the day on Saturday, showing Penn State fans who are clearly ready for some College Game Day action. Hey, that’s a bigger smile than he wore when he won the Heisman! (That was 1991, thirty years ago, btw.)

Good AM from Happy Valley! I think these guys are ready for some college football and @collegegameday. Are you? pic.twitter.com/gJhFc2NFC6

Howard writes: “Good AM from Happy Valley! I think these guys are ready for some collegefootball and @collegegameday. Are you?” If you listen to the WE ARE PENN STATE chant on a loop, it’s truly hypnotic. And it clearly delights Howard.

Considering that Penn State doesn’t take on Auburn until 7:30 tonight (ABC) at Beaver Stadium, they sure are ready! Both teams are undefeated through two contests. GameDay calls it “the best atmosphere in College Football.”

Comments from ESPN’s @CollegeGameDay crew on being back at @penn_state today:
🏈 @KirkHerbstreit: “This is THE best atmosphere in college football”
🏈 @ReceDavis: “I’m amazed every time we come here”

You know how the Nittany Lions are going to take the field, too. With power and purpose, as exhibited below.

Looks like everybody is happy in Happy Valley (see below). No wonder Desmond Howard can’t stop smiling. Here’s part of ESPN’s brief bio on Howard, who recently signed a new multiyear deal with the network: “(Howard) has been an analyst on the Emmy-Award winning College GameDay Built by The Home Depot since 2005 and also calls midweek games on ESPN. He also contributes to a number of ESPN shows and platforms, including Get Up, SportsCenter and College Football Live.”