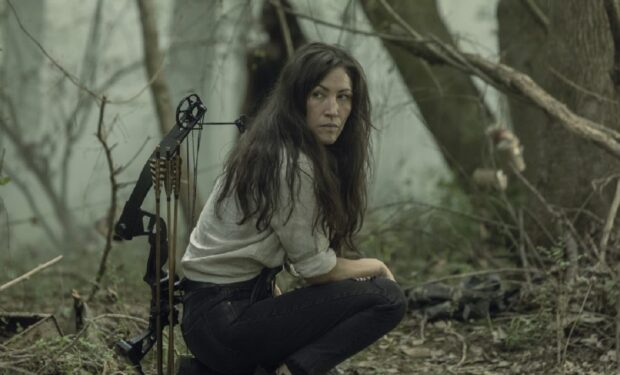 Fans of the super popular zombie killing AMC series The Walking Dead will be tuning in this weekend to watch the premiere of the series final season. According to AMC, in the premiere Season 11 episode ‘Acheron,’ Daryl’s (Norman Reedus) crew scours a military base while Maggie (Lauren Cohan) tells her story and what her group endured prior to returning to Alexandria. See trailer below.

When actress Eleanor Matsuura (who plays Yumiko aka Miko) isn’t filming The Walking Dead, she’s promoting it and looking fabulous while doing so. In the photos below, she stuns in a sheer white dress with short puffy sleeves over a black bra.

When Eleanor shared the all-white corset top with slim pants look below (sans hat), her fans showered her with compliments including: “love your new hair do!” and “that look and that cut are fire” and “obsessed with your new hair.”

The Walking Dead airs Sundays at 9 pm on AMC, followed by The Talking Dead with host Chris Hardwick at 10 pm.