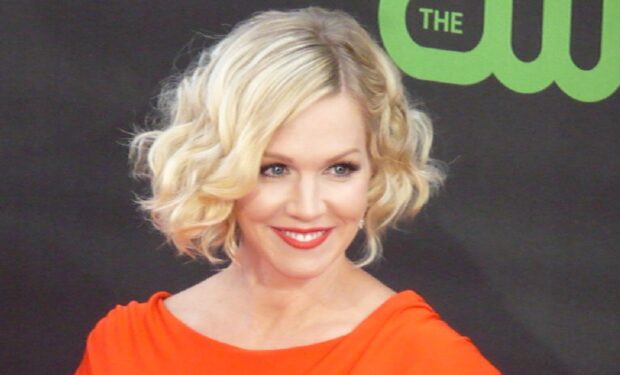 Actress Jennie Garth is best known for her role as Kelly Taylor on the Aaron Spelling teen drama Beverly Hills, 90210 with Tori Spelling, Shannen Doherty, Jason Priestly, and the late Luke Perry. But when not on a TV or movie set, the 49-year-old actress is known as Mom to three gorgeous daughters: 24-year-old Luca, 19-year-old Lola, and 15-year-old Fiona.

When Jennie shared the photo above of her two daughters (Luca is in the plaid dress; Lola is in the brown tee) on a double date with their boyfriends (both named Gabe!), Jennie said she approves of the two young men.

When actress Robyn Lively (big sister of Blake Lively) saw the photo she replied “beauties like their mama!” Fans agree. One wrote: “Your daughter in the brown shirt is giving major Jennie Garth early 90210 vibes” and “she looks a lot like you.” One fan cleverly asked “Are they at the Peach Pit?” a reference to the 90210 diner.