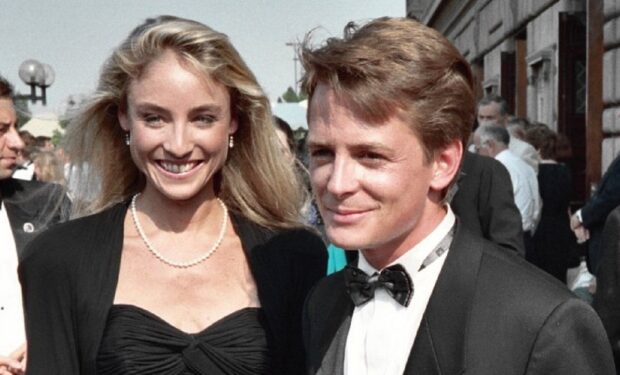 Tracy Pollan and Michael J. Fox in 1988 shortly after they were married, photo: photo by Alan Light, CC BY 2.0, via Wikimedia Commons

Hollywood power couple Michael J. Fox (Back to the Future, Family Ties) and Tracy Pollen celebrated their 33rd wedding anniversary at Aquinnah, Massachusetts (formerly Gay Head), a small town on the western-end of Martha’s Vineyard island with a population of 311. They married in 1988, the same year they both appeared in the movie Bright Lights, Big City.

As seen in the sweet beach photos above and below, Tracy rocked a causal look with a pair of white overalls and black flip-flops. She captioned the photo above: “Where it all began, happy anniversary my love.”

Get ready to hear more of Michael J. Fox: he is voicing the character of xx in the upcoming animated movie Back Home Again with Kim Basinger, Jeremy Renner, Ed Asner, Martin Short, Catherine O’Hara, Eugene Levy, Marlon Wayans, among others.