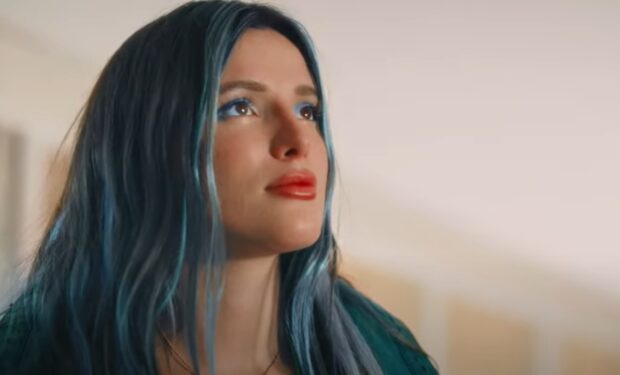 Actress Bella Thorne is known for her roles on Scream: The TV Series (Nina Patterson), The DUFF (Madison), and Shake It Up (CeCe Jones), among others. The 23-year-old entertainer is also known for sharing striking photos of herself on Instagram, where she has amassed nearly 25 million followers.

When she shared the photos above, Bella asked her fans if she should change her signature red hair color. As she says: “I’m getting boredddddd.” Most of the fans who replied suggested staying red. But a few were intrigued. As one wrote: “Omg a new hair color???? Livinggg for it.”

Get ready to see more of Bella: she stars in the upcoming drama Habit as “a street smart party girl gets mixed up in a violent drug deal and finds a possible way out by masquerading as a Nun.” Her co-stars are Michael Jackson’s daughter Paris Jackson and Gwen Stefani’s ex-husband Gavin Rossdale. See trailer above. Habit will be released on Friday, August 20, 2021.