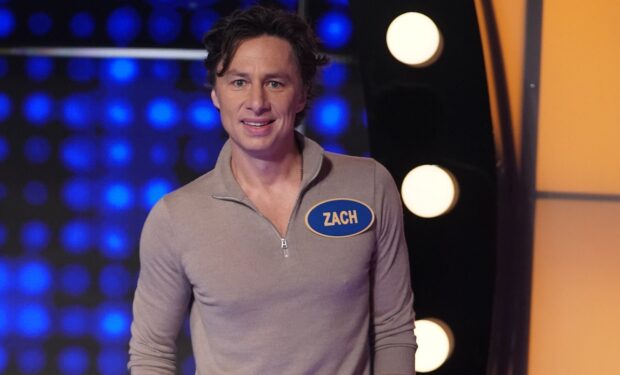 On Season 7 of Celebrity Family Feud, host Steve Harvey welcomes former Scrubs stars Zach Braff and Donald Faison and friends. As depicted on the show, where they play doctors in a hospital, the two actors have become best friends in real life. So much so that they’ve launched the podcast Fake Doctors, Real Friends with Zach and Donald.

On Celebrity Family Feud, they face Scrubs co-star Neil Flynn (Janitor) and his improv crew known as Beer Shark Mice. For the big televised event, Zach wears a beige sweater with a pair of pants with stripes running down the sides and a pair of ankle boots. We think he looks terrific, but some fans and friends are giving Zach a hard time about the ensemble.

When one fan asked “You don’t own a nicer pair of pants?”, Zach replied: “Ok. They are very nice slacks with a stripe down the side. I see now how they look like workout sweats. But alas they are not. I def chose wrong. 😏”

Get ready to see more of Zach: he’s starring in The Comeback Trail with Robert DeNiro, Tommy Lee Jones and Morgan Freeman (see photo above).