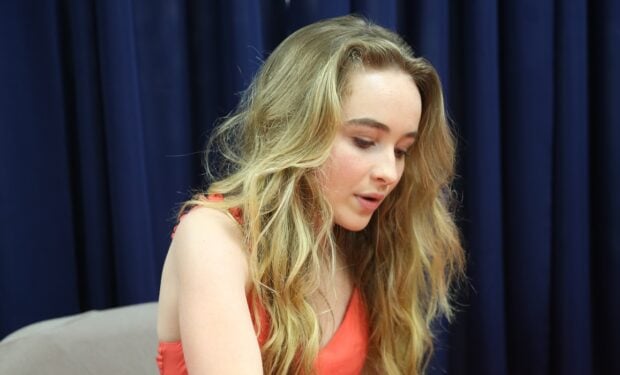 As an actress 22-year-old Sabrina Carpenter is best known for her Disney roles on The Goodwin Games (Chloe), Girl Meets World (Maya), and in films including Adventures in Babysitting, among others. As a singer, she’s released four albums. Her new single “Skin” was released in January.

When Sabrina shared the photos above from a shoot for Flaunt Magazine, her fans went wild for all of the looks, especially that embroidered mini dress with the green skirt and pink bow. It’s called “Gazar” and its by Miu Miu. More than one fan replied: “So pretty.”

The fashion label describes the babydoll dress as being: “Expertly crafted in fine Italian silk, this mini silhouette features an embellished bodice, softened by a sweet bow accent at the waist.”

When Sabrina posed in the navy blue mini dress above, she captioned it “Forbes Under 30.” Singer/songwriter Julia Michaels replied: “WOW.” Julia’s reply has Sabrina’s fans hoping for a collaboration and soon!