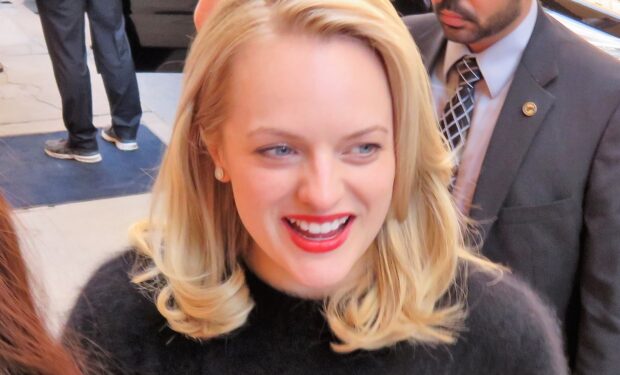 Actress Elisabeth Moss is known for her roles on The Handmaid’s Tale, Mad Men, and The West Wing, among others. When she posted the short hair-cut photos below, she explained that the new look is for a new project, Apple TV’s thriller The Shining Girls, based on Lauren Beukes’ best-selling novel. She captioned the pics: “Welcome to 1992 🖤.”

When the stylist who cut and colored Elisabeth’s hair, Tommy Buckett, re-posted the photos he wrote: “New hair for a new project. #winonaforever cut and color done by me.” Movie star Winona Ryder knew how to rock a dark pixie cut in 1992…see below.

Elisabeth’s fans and famous friends love the new look. When her Handmaid’s Tale co-star Amanda Brugel saw it, she replied: “We need to have a telephone conversation about this look. I can’t unsee this.” And comedian Chelsea Handler wrote: “Oh, I bet you needed that handmaiden hair gone.” Veteran hairstylist Sally Hershberger also applauded Tommy for his work.

Hair stylist Tommy Buckett also groomed Elisabeth as a blond for The Invisible Man premiere, see above. The Shining Girls will premiere in 2022.