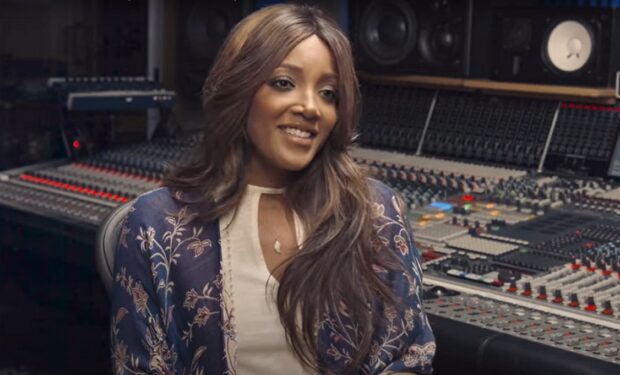 Mickey Guyton is one of 13 (lucky) rising stars in the country music industry who are nominated for the first time for a CMT Music Award. The video for her single ‘Black Like Me’ is up for the Breakthrough Video of the Year award, and her “Heaven Down Here” song is up for Female Video of the Year. Note: ‘Black Like Me’ was also nominated for a 2020 Grammy Award (Best Country Solo Performance): she performed the song at the awards ceremony (video below).

On top of all that recognition, Mickey is also featured in this week’s The New Yorker. She was interviewed for the article titled, ‘Mickey Guyton Takes on the Overwhelming Whiteness of Country Music,’ and posed in two dresses including the stunning “winter white” wide sleeved dress (above and below) by fashion label Solace London. She titled the video above: “Still can’t get over this day and this lewk.”

In the Vevo video above, Mickey reveals the story behind her hit song “Black Like Me.”