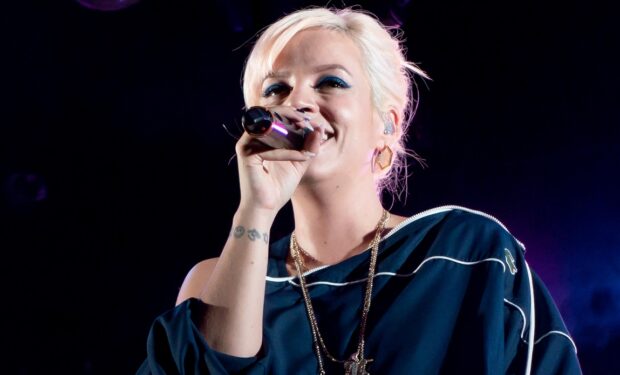 When pop star Lily Allen isn’t on stage or in the studio or spending time with her newlywed husband actor David Harbour, the 36-year-old singer is shopping on line and fetching to-go coffee like the rest of us. When Lily shared the street photo of her below, carrying two coffees, she directed her millions of fans to her phone screen. Yes, that’s a flat iron hair straightener. Lily captioned it: “things i look up while i’m waiting for coffee.”

But that’s not the only thing that her fans wanted to know more. One inquisitive fan wanted to know: “wait how is your phone stuck to your bag?” Yes, at first glance, it appears Lily is performing a magic trick or that the phone has been photoshopped to dangle at her hip like that, but no.

Another Lily Allen fan replied: “I’m pretty sure they just connect to a case that the phone is on” and suggested that he/she check out the brand String Ting which Vogue described as a “bizarre standout accessory.” They’re made by hand in London. Other brands of phone wristlets and cross-body straps which are “a cute way to go hands-free” are available on Amazon.