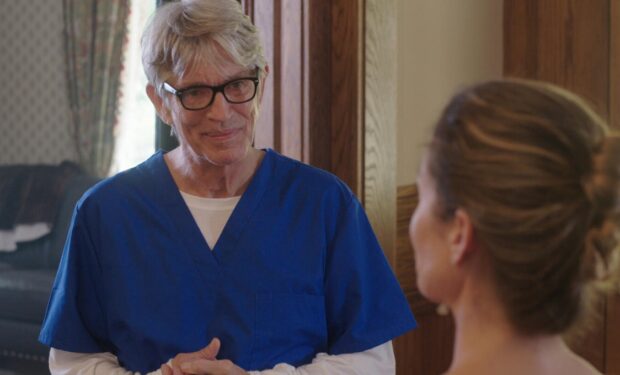 Eric Roberts in Just What the Doctor Ordered (Lifetime)

The antagonist of the Lifetime movie Just What the Doctor Order is Dr. Albert Beck. Oscar nominated actor Eric Roberts (Runaway Train) reprises his menacing role for the movie. This time around, Dr. Beck has escaped from the psychiatric prison, and is hiding out in an empty house–until its new owners move in. Forced to move into the attic, Beck watches the recently widowed mother (Carrie Schroeder) and her gorgeous 18-year-old daughter (Grace Patterson).

[Last time we saw Dr. Beck was in the 2019 movie Stalked by My Doctor: A Sleepwalker’s Nightmare]

Former professional cheerleader Grace Patterson (she was a Dallas Stars ice girl, see photos above) is known for her cheerleading roles in movies including Cheer for Your Life, The Pom Pom Murders, and Who Is Killing the Cheerleaders?, among others.

Just What the Doctor Ordered premieres on Lifetime on Sunday, April 25 at 8 pm.