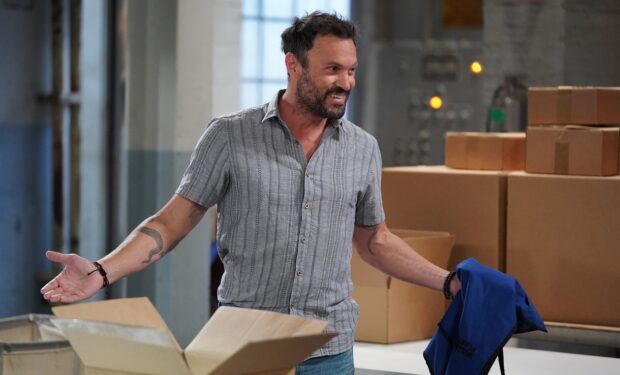 On The Conners episode ‘Regrets, Rehabs and Realtors,’ while Dan (John Goodman) receives some unsolicited advice from a surprise visitor (and brews in guilt), Darlene (Sara Gilbert) welcomes a (hot) new employee to Wellman Plastics. Is she falling for his charm and rugged good lucks?

When not on a TV set, Brian has been spending time with his new girlfriend Sharna Burgess (who’s now a blond!), the Australian Dancing with the Stars professional ballroom dancer — as seen in the Valentine’s Day video above. She won Season 27 of DWTS with celebrity contestant Bobby Bones. (Brian was married to Hollywood movie star Megan Fox.)

The Conners airs Wednesdays at 9 pm on ABC, right after the new family sitcom Home Economics at 8:30 pm.