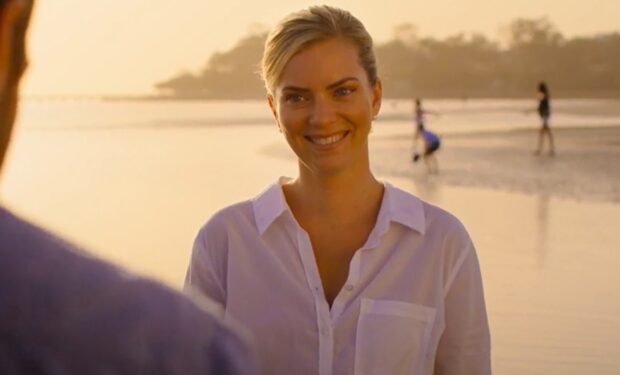 Cindy Busby in Hearts Down Under (Hallmark/Crown Media)

The protagonist of the Hallmark Channel movie Hearts Down Under (also known as Romance on the Menu) is New York City restauranteur Caroline (Canadian actress Cindy Busby). When she discovers that she’s inherited a cafe called the Seagull Café in Lemon Myrtle Cove, Australia, she travels “down under” and not only falls for the quaint town but also its people, including the cafe’s handsome chef Simon (Australian actor Tim Ross).

Hearts Down Under was filmed in Australia — mostly in Queensland — but the town of Lemon Myrtle Cove is fictional. Those village scenes were filmed in the Brisbane coastal suburbs of Shorncliffe and Sandgate.

The Seagull Cafe was filmed at a real cafe known as The Hamptons which is known for serving “delicious all-day breakfast, lunch and Campos coffee.”

Hearts Down Under airs again on Hallmark Channel on Tuesday, April 27 at 8 pm.