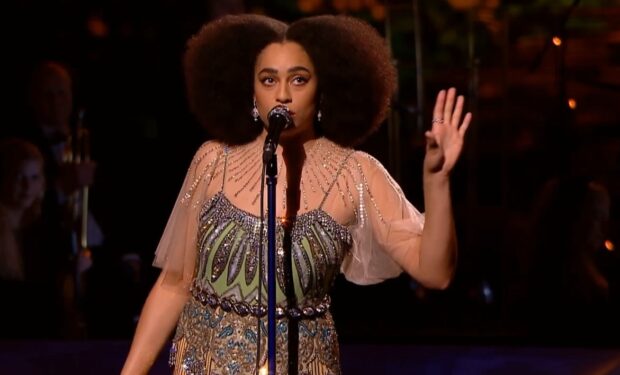 British soul singer Celeste is one of the five artists/acts who will perform their original songs which are nominated for Oscars at the 93rd Oscars awards ceremony. Celeste’s hit song “Hear My Voice” is featured in the Best Picture contender The Trial of the Chicago 7.

The 26-year-old Celeste Waite was born in the U.S. (Culver, California) and moved to her mother’s homeland, the U.K., at the age of 3.

As on January 2021, Celeste She is currently in a relationship with 22-year-old English model and poet Sonny Hall, who’s represented with the Kate Moss Agency in London. Many fans believe Sonny looks like Paul McCartney.

The other four artists performing are: H.E.R. and Daniel Pemberton (“Fight for You” featured in Judas and the Black Messiah); Leslie Odom Jr. (“Speak Now” from One Night in Miami…), Laura Pausini (“Io sì (Seen)” from The Life Ahead), and Molly Sandén and Diane Warren (‘Husavik’ (My Hometown) from EuroVision).

The 93rd Oscars broadcasts live on Sunday, April 25 at 8 pm on ABC.