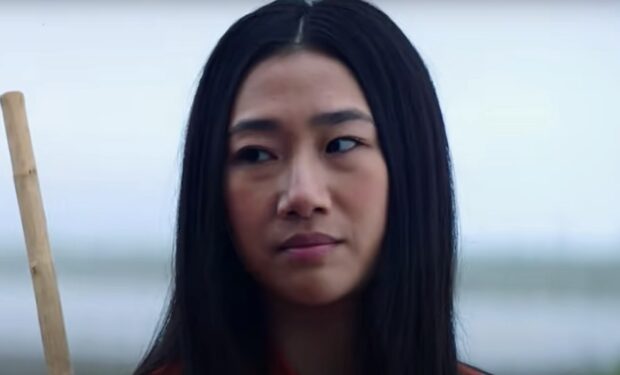 The New CW series Kung Fu is a gender-flipped martial-arts reboot of the 1970s series Kung Fu starring the late David Carradine. The protagonist of the 2021 series is a young Chinese American woman named Nicky Shen (Olivia Liang). She dropped out of college and took a life-changing journey to China, where she spent her time at an isolated monastery, studying martial arts. When she returns to the States, she’s disappointed to find her hometown of San Francisco overrun with crime and corruption.

Nicky uses her martial arts skills to protect her community and bring criminals to justice including the assassin who killed her Shaolin mentor.

Liang says of the project: “To be able to do this project that was so close to Bruce Lee’s heart is truly an honor” and “It’s exciting that we get to reclaim it and to say, ‘Hopefully, we’re doing it justice, the way it should have always been done.’”

Nicky is portrayed by Olivia Liang. The UC San Diego graduate (class of 2017) is best known for her roles on the Vampire Diaries spinoff Legacies (Alyssa Chang), Dating After College (Wendy), and One Day at a Time (Suehee), among others.

Kung Fu premieres on CW on Wednesday, April 7 at 8 pm, right before Nancy Drew at 9 pm.