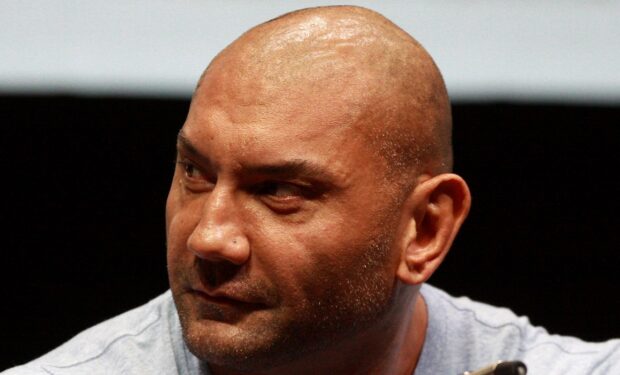 Former WWE wrestler, actor Dave Bautista stars in the new Zack Snyder movie Army of the Dead. Days before the premiere, Bautista posted the photo below (taken in Tampa, Florida) and wrote: “I got spotted today and I was kind of surprised to see a pic of myself going about my daily routine. In my mind I’m a very low key unassuming person.”

Fans laughed at the 6’6″ tall, 300 lbs. actor’s sentiment. One wrote: “Dude, you are a giant Filipino ex wrestler pulling up in a fancy car. Lol.” Another wrote: “No car that has suicide doors would be considered ‘unassuming’.”

His Army of the Dead co-star Omar Hardwick replied: “Bro you will forever be impossible to not be recognized.” Fellow big man movie star Jason Momoa replied: “love the sweater love the roller. love u more.”

Bautista added about the female photographer: “I won’t put the young woman on blast but she was very polite and much more impressed with my ride than she was with myself,” and concluded “Being recognized is a blessing.”