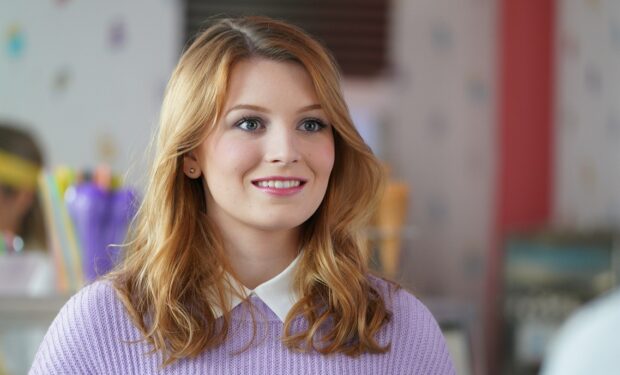 In the American Housewife episode ‘The Guardian,’ Katie (Katy Nixon) and Greg (Diedrich Bader) secretly put Katie’s mother Kathryn (Wendie Malick) through a series of tests to see if she would make a good guardian for Anna-Kat in the unlikely event something should happen to them.

Meanwhile, while campaigning for their father who’s running for city council, Taylor (Meg Donnelly) and Oliver (Daniel DiMaggio) run into the gorgeous Lindsey Coolidge at the ice cream shop. Last time we saw Lindsey was in the ‘Prom’ episode (photo below).

Oliver met her via the Teen Helpline: she complained that no one invited her to the prom so Oliver volunteered to take her. When they met in person, Oliver was surprised at how beautiful she is. (All the other boys were too intimidated by her good looks to ask her out!)

Lindsey Coolidge is portrayed by Madison Thompson. She’s also known for her roles on The Young and the Restless (Jordan), Ozark (Erin Pierce), and Kevin (Probably Saves the World (Jessica), among others.

When not on a TV set, Madison enjoys the great outdoors and sometimes in a bikini as seen in the gorgeous stringy bikini beach pics above.

American Housewife airs Wednesdays at 8:30 pm on ABC, right after The Goldbergs at 8 pm.