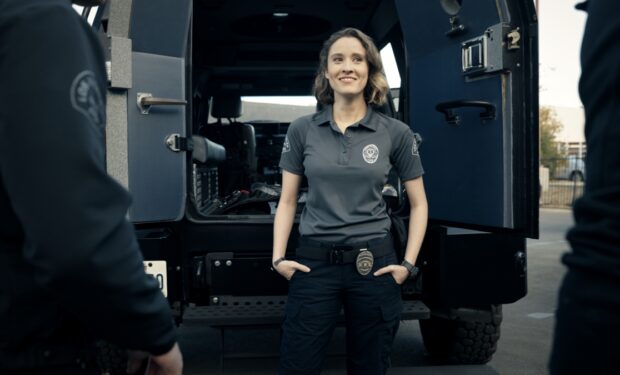 In the S.W.A.T. episode ‘Buried,’ as the SWAT team helps the LAPD search for the prime suspect in a woman’s disappearance, they’re joined in the field by a new team member, tactical medic Nora Fowler.

When Hondo (Shemar Moore) asks her why she signed up this (it’s temporary), she says, “I’ve seen combat as an Army medic, was an EMT for LAPD and finished for in her class in mountain rescue and deep water.” When Hondo suggests that she’s doing it to add another notch in her resume, she says, “I’m looking to save lives and I’m told that’s what SWAT does too.”

Fowler is portrayed by Norma Kuhling. She’s best known for her role as Dr. Ava Bekker on Chicago Med and Chicago Fire. Norma made her acting debut in the 2009 film The Joneses with Demi Moore and David Duchovny (Amber Heard plays their daughter!).