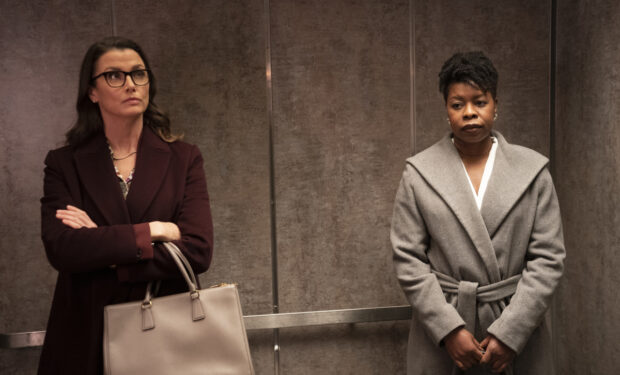 On the Blue Bloods episode ‘More Than Meets the Eye,’ ADA Erin Reagan (Bridget Moynahan) tries not to feel overpowered as her new boss D.A. Kimberly Crawford (Roslyn Ruff) shadows her at work. When Erin confides in her father (Tom Selleck) about the friction at work, he asks, “How does it feel to be overlooked for the job?” Erin replies, “I wasn’t overlooked, I wasn’t chosen.” Erin concludes that they may be on the same team but they’re using different playbooks.

D.A. Kimberly Crawford is portrayed by Roslyn Russ. She’s best known for her roles on Lincoln Rhyme: Hunt for the Bone Collector (Claire), Godfather of Harlem (Delia Greene; video below), Madam Secretary (FBI Director Marguerite Sanchez), Divorce (Sylvia), and in Hollywood films including The Help (Pascagoula) and Rachel Getting Married (Rosa), among others. Fun fact: Roslyn made her acting debut in a 2004 episode of The Sopranos as a receptionist at The Plaza.

Blue Bloods airs Fridays at 10 pm on CBS, right after Magnum PI at 9 pm and MacGyver at 8 pm.