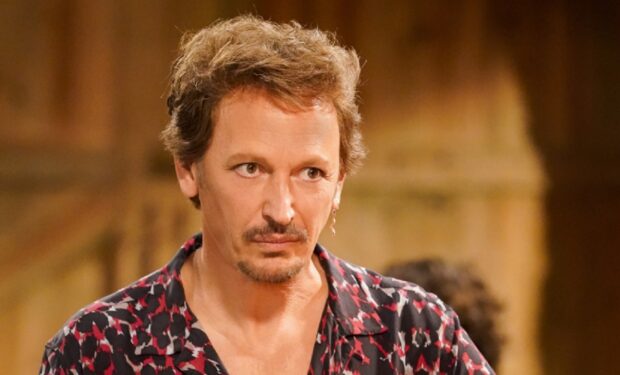 On the Mom episode ‘Strutting Peacock and Father O’Leary,’ while Jill (Jaime Pressly) trades barbs with a worthy opponent, Bonnie (Allison Janney) takes it personally when her new sponsee, “rocker” Rod gets inspiration from Bonnie’s husband Adam (William Fichtner) instead of her.

Rod is portrayed by Steve Valentine. The 6’5″ Scottish-born actor is best known for his roles on Anger Management (Dr. Lesley Moore), I’m in the Band (Derek Jupiter), and Crossing Jordan (Dr. Nigel Townsend), among others.

Steve is not really in a rock band although he has played one before (I’m in the Band) and occasionally bumps into rock legends including Huey Lewis as seen in photo above and Curt Smith from Tears for Fears below.

Mom airs Thursdays at 9 pm on CBS, right after B Positive at 8:30 and Young Sheldon at 8 pm.