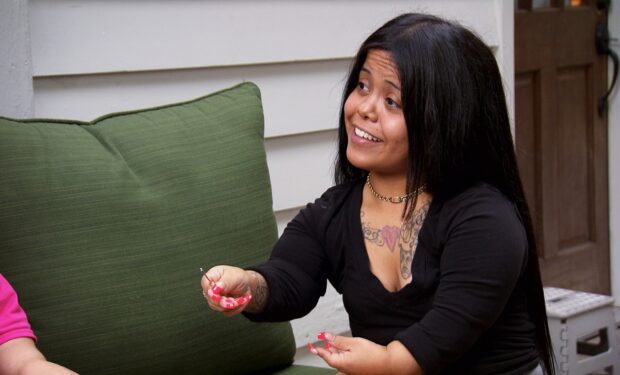 In the Little Women: Atlanta episode ‘Little Women, Big Voices,’ while Abira shows up tipsy to a self-defense class, causing Juicy to question what’s really going on, Andrea tells her twin sister Amanda that she’s moving out. (Andrea has been staying with Amanda and her husband Jordan ever since Andrea and Chris separated.)

In the sneak peek video below, Andrea says, “Even though I’d rather stay here, it’s time for me to move out.” When Andrea presents Amanda with the key to her house, “I want to give you your key back,” Amanda is surprised.

Amanda gets emotional about her “little sister” (Amanda was born one minute before Andrea!) moving out. “I get worried,” Amanda says and then breaks down, “I just want to know that you’re going to be okay.” Andrea apologizes for not telling her sooner which makes Amanda declare, “I hate change.”

Andrea diverts Amanda’s attention back to her and reminds Amanda that she’s scared of living on her own (without Chris). Andrea says: “I’m gonna walk out that door today but inside I’m screaming and kicking.” Still, Andrea knows it’s the right thing to do. No one wants to be “the extra third wheel.”