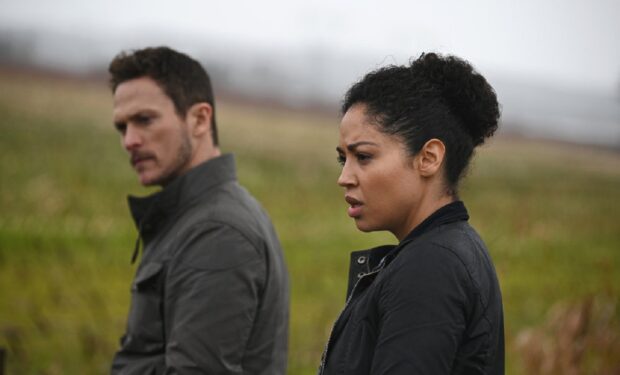 NBC’s new sci-fi, paranormal TV series Debris follows two government agents — American Bryan Beneventi (Jonathan Tucker, Westworld) and British Finola Jones (Riann Steele, Ant-Man and the Wasp) — as they work on the same case. Together they investigate and collect fallen pieces from a destroyed alien spacecraft which have been found scattered across the Western Hemisphere.

The shards (some are as small as tortilla chips) are causing the most unusual effects on the earthlings who physically touch them. In the pilot, when Agent Jones recovers after experiencing the power of the mystery spacecraft first-hand, she describes it to Beneventi as “terrifying but beautiful.”

The cinematography of Debris is breathtaking, and the director isn’t afraid to expose the character’s raw emotions with silence.

One of the most captivating and quiet scenes in the pilot is when the agents find a dead body hovering over a field, facing the sky (see photos above). When they realize her sleeve is caught on barbed wire, they release it and follow her as her body appears to be magnetically pulled toward a hidden cyclone of other floating dead bodies. The scene is significantly creepier without dialogue.

Debris premieres on Monday, March 1 at 10 pm on NBC, right after The Voice at 8 pm.