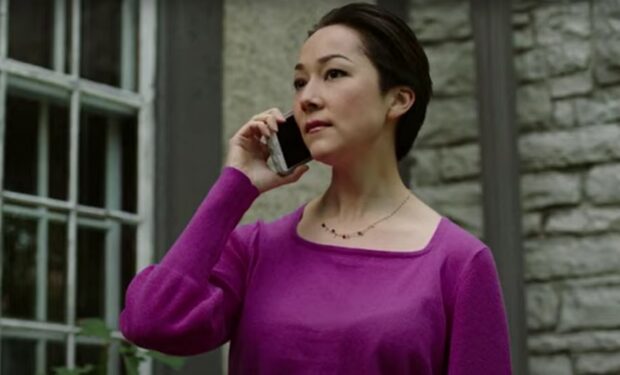 Emily Piggford (as Charlotte) in The Evil Twin (LMN)

The protagonist of the Lifetime movie The Evil Twin is Emily. After escaping from an abusive relationship, she moves back to her hometown, where she believes she will be safe. But boy is she wrong. There she meets her long-lost twin sister Charlotte, who turns out might be a murderer.

Charlotte and Emily are both played by actress Emily Piggford. Americans will recognize the Canadian-born actress from her role as Ashley Valentine on the TV horror series Hemlock Grove with Famke Janssen, Bill Skarsgard and Lily Taylor.

Most of The Evil Twin (including the haunted mansion) was filmed in the former mill town of Almonte, Ontario in Canada. The last textile mill closed in the late 1980s. Almonte, which is about 30 miles southwest of Ontario, has a population of roughly 5,039. Fun fact: Almonte is the hometown of James Naismith, who is known as the inventor of the game of basketball.