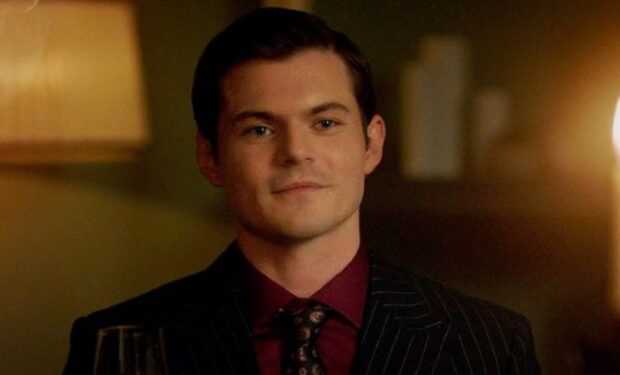 In the Riverdale episode ‘Chapter Eighty-Two: Back to School,’ while Archie (KJ Apa), Betty (Lili Reinhart) and Jughead (Cole Sprouse) prepare for their first day as teachers at their alma mater Riverdale High, Veronica (Camila Mendes) introduces her husband Chad Gekko to the group after he shows up unexpectedly.

In the video below, Chad and Veronica celebrate their one year anniversary. When Chad suggests it’s time for them to start a family, Veronica says “hopefully” but without conviction. She says she misses being on the trading floor with Chad and “talking smack with the guys” and claims “they called me the She-wolf of Wall Street.”

Note: The surname Gekko is a nod to the slick-haired character Gordon Gekko in Oliver Stone’s 1987 film Wall Street. Gekko, played by Michael Douglas who won an Oscar for the role, famously proclaims “Greed is good.”

Chad is portrayed by Chris Mason. The 30-year-old British actor is known for his roles on Dirty John (Young Dan Broderick/Christian Slater’s character — photo above), Pretty Little Liars: The Perfectionists (Nolan Hotchkiss), and Broadchurch (Leo Humphries), among others.

In real life: Chris is married to Spencer Locke and they just became parents in July 2020. It’s a girl!

Riverdale airs Wednesdays at 8 pm on CW, right before Nancy Drew at 9 pm.