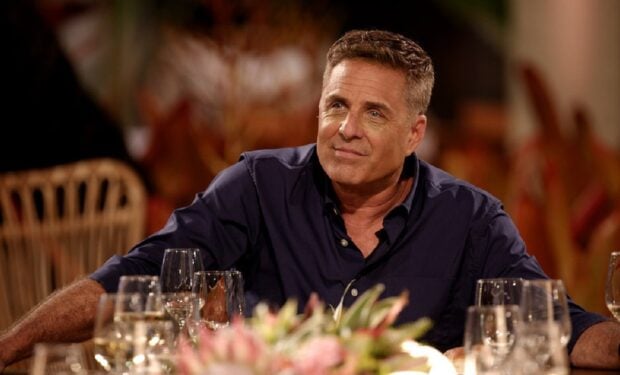 In the Season 3 premiere of the reality dating TV series Temptation Island, ‘Don’t Drop A Dime For A Nickel,’ four new couples at the most vulnerable time in their relationships travel to Maui, Hawaii. There, they’re tempted by 24 sexy single men and women who are looking for love, mostly. By the end of the season, each of the couples must decide whether to stay together or break up.

The original host of Temptation Island (Season 1 aired in 2001), Mark L. Walberg, returns for Season 3. He’s best known for his longing-running gig as host of PBS’s popular reality show Antiques Roadshow (2002-2019), for which he was nominated twice for a Daytime Emmy Award.

Mark Walberg, 58, who is not related to Hollywood movie star Mark Wahlberg (note the different surname spelling), although like Marky Mark he’s a fan of Air Jordans and working out — see photo above which he tagged #othermarkwalberg.

The Temptation Island host is married to actress Robbi Morgan (Annie in the 1980 horror flick Friday the 13th). They got hitched in 1987. See cute couple photo below.

Temptation Island airs Mondays at 10 pm on Bravo, right after Below Deck at 9 pm.