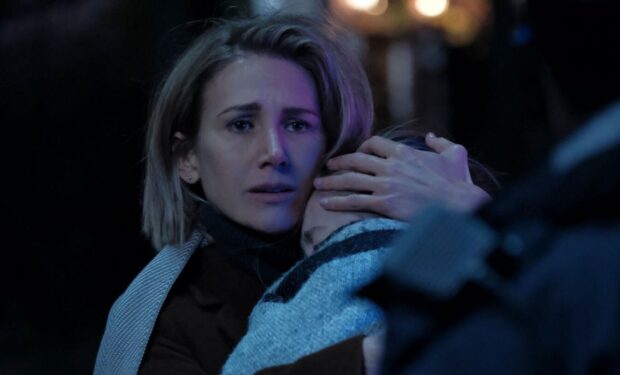 Jennifer Landon in Stalker in the Attic (LMN photo)

The protagonist of the Lifetime movie Stalker in the Attic (originally titled Within These Walls) is Mel Carver. As if being a single mom wasn’t hard enough: after breaking up with her boyfriend Ben (Joshua Close), who is forced to move out, she starts to notice strange things (sounds and shadows) in her house. So strange that she starts to fear for her life.

Mel is portrayed by Jennifer Landon, daughter of the late, great TV actor Michael Landon (Charles Ingalls aka Pa on Little House on the Prairie and Little Joe on Bonanza). He died in 1991 at the age of 54.

Jen is known for her roles on Yellowstone with Kevin Costner (Teeter, see photo above), Animal Kingdom (Amy), Banshee (Lilith Bode), and on soap operas including Days of Our Lives (Hillary Nelson), The Young and the Restless (Heather Stevens), and As the World Turns (Gwen Munson — for which she won 3 consecutive Daytime Emmy Awards!), among others.

Jen Landon made her acting debut in a 1989 episode of her father’s show Highway to Heaven.

Stalker in the Attic airs again on Lifetime Movie Network (LMN) on Wednesday, February 3 at 10 pm.