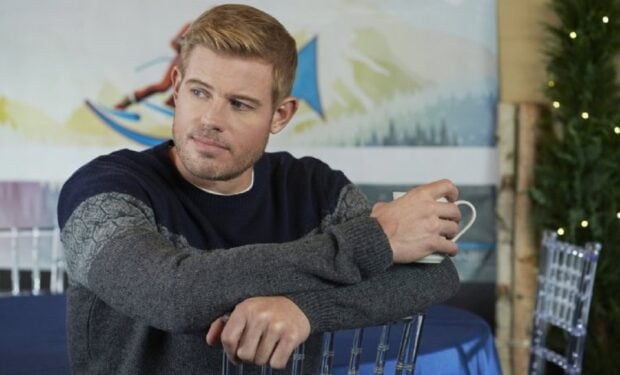 Trevor Donovan in 'Two For the Win' (Hallmark/Crown Media photo)

In the Hallmark Movie Two For the Win, world champion skier Justin (Trevor Donovan) returns to his hometown while recovering from a serious knee injury. When he hits the slopes back home, he literally bumps into his ex-girlfriend, local ski instructor Kayla Green (Charlotte Sullivan).

Before launching his modeling and acting career, 6’3″ Trevor Donovan (Teddy on 90210) grew up skiing and snowboarding in California, and was on the U.S. teen ski team. He did a lot of the actual skiing as seen in Two for the Win. He said of his skiing scenes: “we got a lot of cool shots where I’m buzzing by the camera and you’ll be able to see it’s my face.”

Two For the Win airs again on Hallmark Channel on Monday, February 8 at 7 pm.