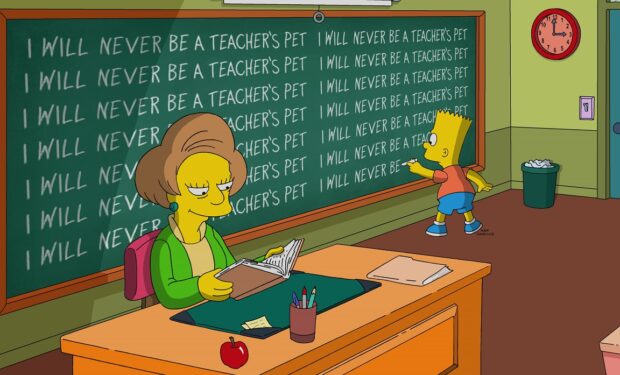 On The Simpsons Season 32 episode ‘Diary Queen,’ Bart finds the diary of his old fourth grade teacher Edna Krabappel, and learns a surprising secret. Then, Lisa discovers an even bigger surprise.

In 2013, The Simpsons showrunner Al Jean announced the retirement of the character Mrs. Krabappel from Springfield Elementary School (who married Ned Flanders in Season 23) when actress Marcia Wallace, who voiced Mrs. K., died. She was 70.

Marcia won a Daytime Emmy Award for her role on The Simpsons episode “Bart the Lover” in 1992.

Prior to The Simpsons, Marcia Wallace was best known for her on-camera role as receptionist Carol on The Bob Newhart Show. She was also well recognized as the Nurse on 7th Heaven and Mrs. Carruthers on Full House, among others.