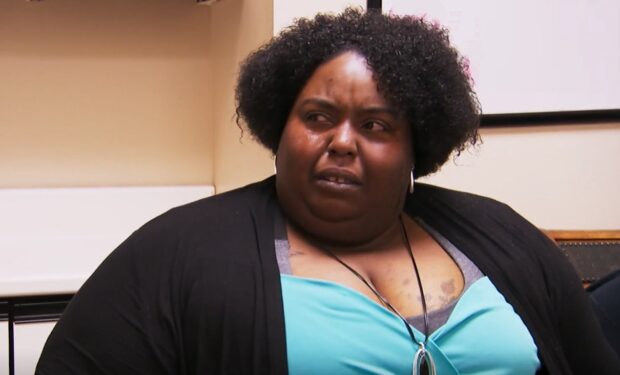 On My 600-lb Life, the documentary TV cameras follow a young obese woman named Kenae. According to TLC, she was “already big before her weight gain took off after the death of her beloved mother.”

In the sneak peek video below, Kenae is crying at second meeting with Dr. Now. At their first meeting, he asked Kenae to lose 100 lbs. but she lost just 22 lbs. She admits 22 isn’t close to 100 but “it’s not zero.”

In between sobs, Kenae tries to tell Dr. Now that she isn’t taking the opportunity lightly. She knows she wants and needs the “life changing surgery” because she wants to live. While looking up at the ceiling as if talking to a spirit above, Kenae says: “I feel my God has something else for me. I feel like my God has more for me.”

Her voice gets louder when she declares: “My obesity is my fault” — she says it twice with conviction. “And I take the blame for it.” Dr. Now finally speaks, and asks her calmly, “Okay, what do you want me to do for you?”

That’s when Kenae turns on Dr. Now and says, “You gave me a diet that was written out on paper… I could have Googled all of that.” Dr. Now says she couldn’t have, but Kenae goes on to insist that she’s taking the weight loss journey seriously.

She doesn’t come out and say it but it sounds like she’s wanting a pat on the back for losing 22 lbs. in two months. Dr. Now is having none of it. He tells her: “You come here and cry and shout and yell at me, that you’re doing okay. But I’d be lying to you if I told you you’re doing good.”

Deep down inside, Kenae knows Dr. Now is right, but is that enough motivation to get her to lose the additional 78 lbs. to qualify for the bypass surgery?