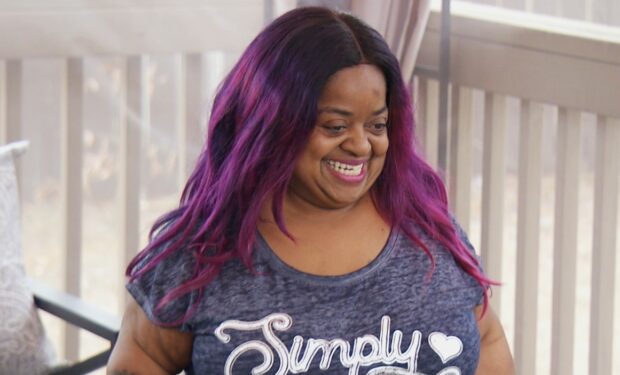 In the Little Women: Atlanta episode ‘Minnie’s Got a Man,’ Juicy invites Minnie to her porch for “a little girl chat.” While rocking a purple shade of lipstick that matches her purple hair, Juicy somberly apologizes to Minnie for what she said at the Little Women: Atlanta kick-off. At the televised event, Juicy questioned if Minnie lied about being sick. After most of the ladies gasped with disbelief, Minnie called Juicy “a miserable bitch.”

In the sneak peek video above, when Juicy says, “I realized that hey, I hurt her by saying that,” Minnie wipes a tear from her eye.

Minnie admits that she had “a track record of not telling the truth” but the accusation that Minnie wasn’t sick “was a low blow.” Minnie tells Juicy, “You can question me about my man or anything else but my health, that hit home. I don’t play about my health.”

Juicy is uncharacteristically quiet while Minnie talks and wipes away another tear. When Minnie says “I accept your apology,” Juicy exposes a sweet grin.

“Whoo, that’s a relief,” Juicy says after filming the scene. “I didn’t know how that was going to go. There’s a lot of history between me and Minnie.” How long do you think this truce is going to last?